Jeremy Bulloch was born on February 16th, 1945 in England. At age twelve he started working as an actor and appeared on television for the first time in a commercial. He got his big break at age seventeen with the Cliff Richard film “Summer Holiday” from 1963. In 1977 he appeared in a James Bond film for the first time, in “The Spy Who Loved Me” as the character Smithers. He would later reprise this role for the films “For Your Eyes Only” (1981) and “Octopussy” (1983).

Star Wars fans know him best as the bounty hunter Boba Fett, who appeared in the 1980 blockbuster “The Empire Strikes Back” and returned in “Return of the Jedi” (1983). He more or less thanked this role to his half brother, Robert Watts, who worked for Lucasfilm as a associate producer and was given the task to find someone who could portray the role of Boba Fett.

But it did not end there. During the production of Empire someone was needed who could play an Imperial Officer, who was tasked on Cloud City with bringing Princess Leia and Chewbacca to Darth Vader’s Shuttle. At that time there wasn’t an actor available. Bulloch was subsequently asked to play the officer, who was later named Luietenant Sheckil. Many years later Bulloch returned to the Star Wars universe once more. This time for the film “Revenge of the Sith” in which as Captain Colton he transported Obi-Wan Kenobi, Yoda and Bail Antilles in his Alderaan Cruiser to Coruscant after the execution of Order 66.

Jeremy Bulloch will be answering questions of visitors and taking part in a signing session at Echo Base Con. Autograph price: EUR 20. 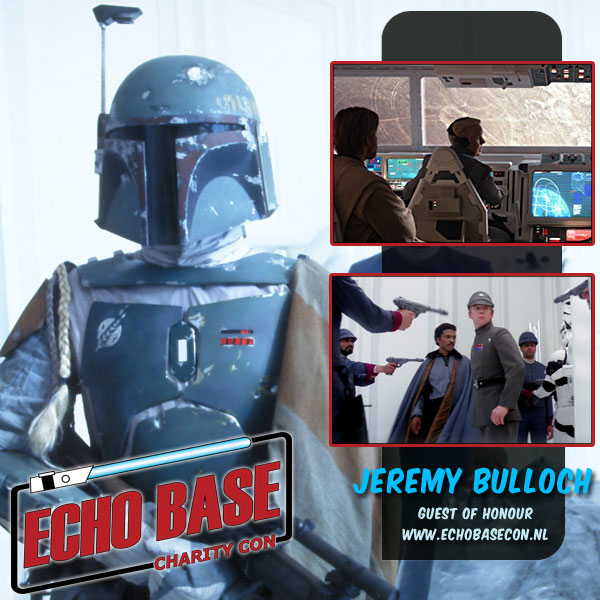 …Back to the main page.