Tim Rose was born on July 17, 1956 in Illinois (USA) but grew up in New York state. He started his career as puppet creator and performer at the Jim Henson Company, where he worked on the television shows “The Muppet Show” and “Sesame Street”. He also worked on various movies, such as “The Great Muppet Caper”, “The Dark Crystal”, “Labyrinth” and “Muppet’s Christmas Carol”.

In 1982, Tim received a phone call from Mike McCormick who was doing pre-production work on “Return of the Jedi”. An injury prohibited him to perform the character of Sy Snootles, and Rose was asked to take over his duties. Because a working relation between The Henson Company and Lucasfilm already existed, Rose was loaned out to the film.

Besides Jabba’s singer, Rose also performed Admiral Ackbar (with Mike Quinn) and Salacious Crumb. Crumb was originally only supposed to be a background character, but because of Rose’s antics it soon became the crew’s favorite and his role was expanded.

After his adventures in the galaxy far, far away he worked on various other movies and television shows, such as “Teenage Mutant Ninja Turtles“, “Fierce Creatures“, “Spitting Image“, “Dinosaurs“, the George Lucas film “Howard the Duck” and created the heads of the “Teletubbies“.

With the acquisition of Lucasfilm by Disney, a new adventure for Rose began in the Star Wars universe. In “The Force Awakens” he returns as Admiral Ackbar, a character that will also be seen in the new Star Wars film, “The Last Jedi“! He also performed the Mon Calamari Shollan in “Rogue One: A Star Wars Story”.

Tim Rose will be answering questions of visitors and taking part in a signing session at Echo Base Con. Autograph price: EUR 20. 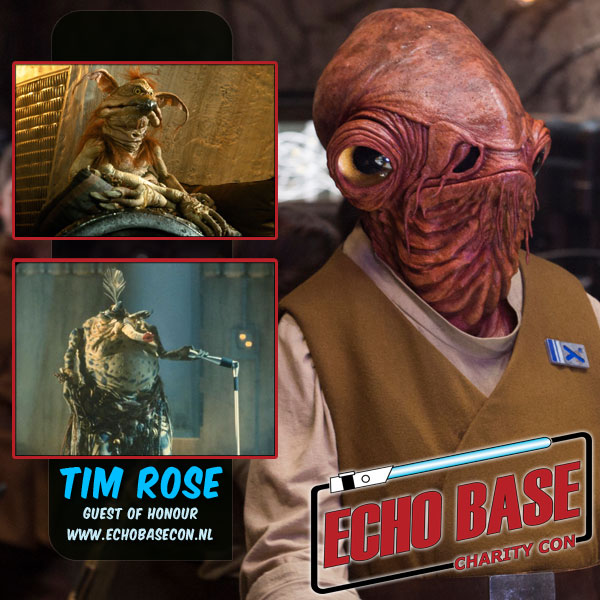